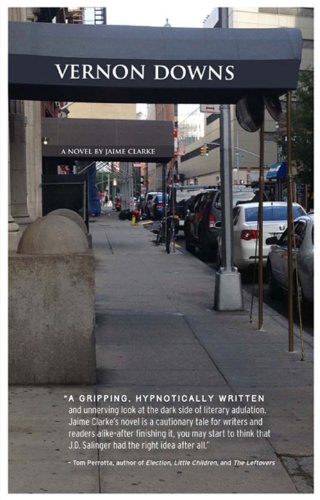 A disturbed young man hatches an unusual plan to win back his ex-girlfriend, in Clarke’s sophomore novel (after 2001’s We’re So Famous). After Charlie and Olivia, who are both creative writing majors at Glendale Community College, Calif., break up, a despondent Charlie decides to impress Olivia by attracting the attention of her favorite writer, Vernon Downs. He travels to New York City and, through a combination of luck and audacity, quickly worms his way into Vernon’s inner circle. An itinerant childhood left Charlie with a weak sense of self, and the longer that he stays in Vernon’s orbit, the more he seems to confuse his identity with the famous author’s. The novel works well when humorously skewering the 1990s literary scene, with Vernon reminiscent of Bret Easton Ellis. Vernon’s monstrous narcissism, coupled with Charlie’s vacuity, make for chilling scenes of manipulation and sycophantism. However, key plot points, such as Charlie’s bluffing his way through a writing workshop, seem hurried and contrived. His near-pathological ability to shed his surroundings and start over, meanwhile, defuses the effectiveness of the book’s most potentially suspenseful binds. Although Clarke’s novel manages to be satirical, chilling, and tense, the different elements don’t meld in the end. (Apr.)
close
Details