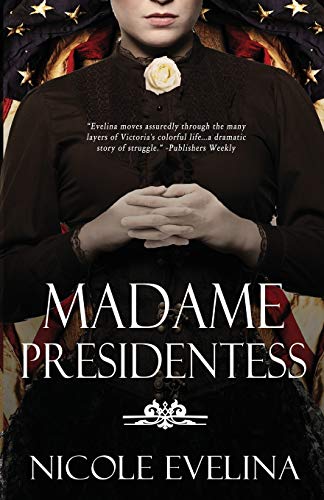 Evelina’s intriguing account of Victoria Woodhull—spiritualist, suffragette, stockbroker, and politician—deftly extols the many “firsts” of this 19th-century feminist trailblazer. Born dirt-poor in 1838, Victoria has clairvoyant visions that begin in childhood, which prompt her father to use her cruelly in his fraudulent spiritualist schemes. To escape, at age 15 Victoria marries Canning Woodhull, an alcoholic, morphine addict, and womanizer. In 1864, Victoria and her two children leave Canning and settle in St. Louis, where she works as a clairvoyant. There she marries James Blood, a Civil War colonel. Victoria parlays her inside knowledge of the stock market, gleaned from brothel workers, to become rich. She then uses her wealth to advocate publicly for women’s issues, drawing from her own experiences. She joins the suffragettes, opens the first woman-owned Wall Street brokerage office, starts a newspaper, advocates for “free love,” and, in 1872, runs as the first woman candidate for U.S. president. Gossip, rumors, tabloid slurs, family betrayal, jail, and abandonment by allies follow Victoria as she becomes a rising star in the labor, suffrage, and marital reform movements. Evelina moves assuredly through the many layers of Victoria’s colorful life; such potent issues as family torment, marital abuse, and female subjugation all are linked in this dramatic story of struggle. [em](BookLife) [/em]
close
Details