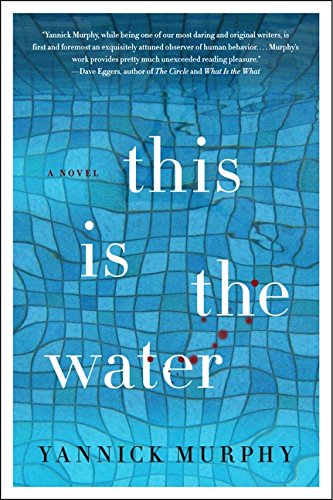 This Is the Water

With her obscenely suspenseful latest, Murphy (The Call, named one of PW%E2%80%99s best books of 2011), who is known for her stylistic experimentation, tries out a second-person perspective and a continual %E2%80%9Cthis is%E2%80%9D structure that takes some getting used to, but that works thanks to the fact that the author breaks up the book into 48 short chapters. %E2%80%9CYou%E2%80%9D are Annie, a New England mom driving your two daughters to and from swim meets, married to an emotionally aloof husband whose encyclopedic mind and frequent recitations of factual tidbits drive you crazy. But you, the novel%E2%80%99s protagonist, don%E2%80%99t know everything that you, the reader, know%E2%80%94for instance, only the reader knows the identity of a serial killer scoping out potential next victims on the swim team. Therefore the book%E2%80%99s real tension centers on which of the characters will uncover the killer first, making this inverted murder mystery a %E2%80%9Cwhogotit%E2%80%9D rather than a whodunit. Potential detectives include the beautiful Chris, a fellow swim team parent; her husband, Paul, whom Annie develops a crush on; Mandy, the facility janitor; and even the unlikely Dinah, one of the more amusing characters%E2%80%94a villain of the judgmental suburban mom variety. Though the novel starts off galloping, it does slow in the middle as Annie%E2%80%99s thoughts become tiresomely repetitive (she dwells on Paul to distract herself from recurring memories of her brother%E2%80%99s suicide, even after Paul reveals to her his secret connection to the ongoing murders). But in Murphy%E2%80%99s hands, the structure becomes almost hypnotic%E2%80%94and when the story hits full speed in the final quarter, the suspense becomes almost excruciating. (Aug.)
close
Details