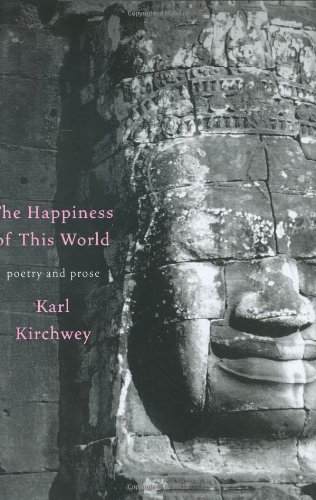 The Happiness of This World: Poetry and Prose

A fine draftsman of formal verse, and a careful, gentle observer of American and Italian landscape and art, Kirchwey ( , 2002) has been a poet more respected than cherished; with this vivid collection, that may change. Kirchwey begins with poems and ends with moving prose, about family past and present. In one of the best of the lyric works in part one, Kirchwey envisions his son "dodging the blasted yew," "striding into the day/ like Gandalf toward Mordor." An appropriately stripped-down, grimly serious tribute to the sculptor Alberto Giacometti (incorporating the sculptor's own words) makes the highlight of part two, whose poems all focus on other artists and their art: here and throughout—as with the best of Stanley Kunitz—a web of allusions bolsters, rather than detracts from, Kirchwey's sincerity. Part three lets Kirchwey's normally controlled verse, and his talent for closed forms, denounce with righteous vigor the recent conduct of the American government—there's even an effective villanelle about Abu Ghraib. The poet closes with a prose memoir, dedicated to Yama, the Hindu goddess of death, which links various aspects of his family history to world events