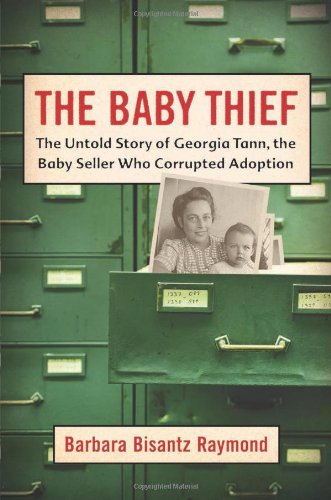 The Baby Thief: The Untold Story of Georgia Tann, the Baby Seller Who Corrupted Adoption

An episode in American adoption history little remembered by the public at large, the crimes of nationally lauded Memphis orphanage director Georgia Tann are skillfully and passionately recounted by freelance writer Raymond, herself an adoptive mom. The portrait of Tann that emerges is that of a domineering, indefatigable figure with an insane commitment to ends-justify-the-means logic who oversaw three decades of baby stealing, baby selling and unprecedented neglect. Meanwhile, she did more to popularize, commercialize and influence adoption in America than anyone before her. Tann operated carte blanche under corrupt mayor Edward Hull Crump from the 1920s to the '50s, employing a nefarious network of judges, attorneys, social workers and politicos, whom she sometimes bribed with â€œfreeâ€ babies; her clients included the rich, the famous and the entirely unfit (who more than occasionally returned their disappointing children for a refund). â€œSpottersâ€ located babies and young children ripe for abductionâ€”from women too uneducated or exhausted to fight backâ€”and Tann made standard practice of altering birth certificates and secreting away adoption records to attract buyers and cover her tracksâ€”self-serving moves that have become standard practice in modern adoption. A riveting array of interviews with Tann's former charges reveals adults still struggling with their adoption ordeal and childhood memories stacked with sexual abuse, torture and confusion. Raymond's dogged investigation makes a strong case for â€œridding adoptions of lies and secrets,â€ warning that â€œ[u]ntil we do, [Tann] and her imitators will continue to corrupt adoption.â€ A rigorous, fascinating, page-turning tale, this important book is not for the timorous