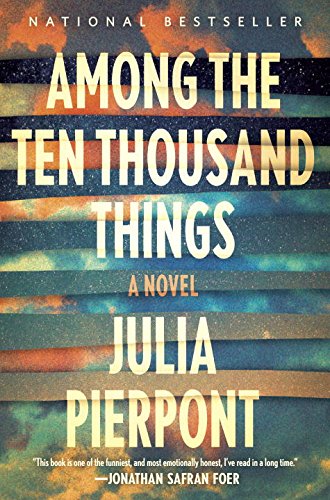 Among the Ten Thousand Things

The perennial theme of marital infidelity is given a brisk, insightful, and sophisticated turn in Pierpont’s impressive debut. When their father’s emails to his former mistress are inadvertently discovered by siblings Kay Shanley, 11, and Simon, 15, the result is the unraveling of the family. Their father, Jack Shanley, is a well-known conceptual artist and self-indulgent seducer, and he sees his career go downhill due to a variety of circumstances. Deb, his wife, carries guilt from having broken up Jack’s first marriage, only to realize that he’s an inveterate womanizer who feels his indiscretions should be forgiven. Pierpont’s keen observational gaze illuminates a strata of Manhattan society in which money and privilege abide alongside the gritty, drug-and-alcohol-fueled margins of social behavior. She is also particularly adept at portraying alienation in the young (Kay starts writing dirty Seinfeld fan fiction in a notebook; Simon reads The Fountainhead because he knows his mother doesn’t want him to) and the parents’ awkward attempts to communicate with their self-protective children. Her sense of humor surfaces, especially in a scene at a gallery opening, when Jack’s carefully planned and shocking installation goes awry. Pierpont throws an audacious twist midway through the book, giving the slow, painful denouement a heartbreaking inevitability. This novel leaves an indelible portrait of lives blown off course by bad choices, loss of trust, and an essential inability to communicate. (July)
close
Details