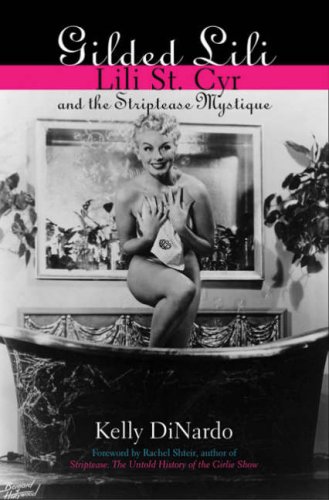 Contemporary â€œstripper chicâ€ and the â€œneo-burlesque movementâ€ have spurred new interest in Lili St. Cyr, one of America's best-known postwar striptease artists, and this swift, engaging biography from freelance writer DiNardo is sure to satisfy, offering not only a portrait of the pioneering sex symbol, but also a carefully researched history of the burlesque industry from the mid-1800s to its 20th-century heyday. Most enthralling, however, is the delicious dossier of St. Cyr's lovers; although St. Cyr's official husband count is six, her love affairsâ€”with both men and womenâ€”may number into the hundreds. Ironically, she battled loneliness all her days, sinking into despair and heroin addiction toward the end of her life. The story of the burlesque queen with the physique of a goddess makes for great reading, and gossip hounds will delight in rumors that â€œGilded Liliâ€ taught Marilyn Monroe many of her best-known sexpot affectations. (Even more intriguing, sources claim that St. Cyr had a clandestine love affair with the blonde bombshell.) DiNardo shows admirable skepticism while reporting the salacious morsels long associated with St. Cyr, sorting the stage siren's real life from the legend that grew around her. Despite the rigors of fame, Lili proves strikingly self-awareâ€”â€œYears of adulation... spoiled me,'â€ she admittedâ€”making her as tragic and sympathetic a figure as any of the famously troubled stars who followed.