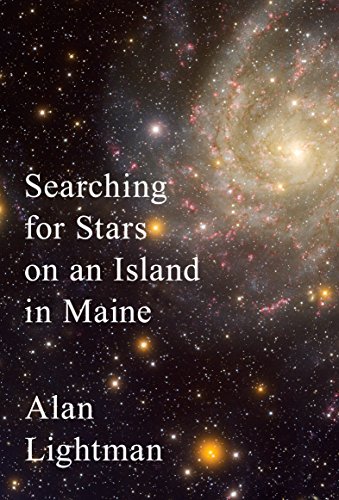 Searching for Stars on an Island in Maine

Novelist and physicist Lightman (The Accidental Universe) mesmerizes in this collection of essays that explores the connections between scientific ideas and the wider world. He sets his stage neatly, with an evocative memory of gazing up at the starry night sky while in a little boat drifting near a small island off the coast of Maine. There he found himself “falling into infinity” as he gazed into the cosmos: “I felt a merging with something far larger than myself, a grand and eternal unity, a hint of something absolute.” Absolutes, Lightman writes, are comforting because they allow humans to “imagine perfection.” This idea echoes in essays that focus on such topics as ants, stars, death, and truth. Lightman discusses the big bang, prehistoric cave paintings, the nature of humanity, and more as he moves lithely from Galileo to van Gogh, Einstein to Emily Dickinson, and St. Augustine to Arctic explorer Robert Peary. More philosophy of science than hard science, this is a volume meant for savoring, for readerly ruminations, for thinking about and exploring one essay at a time. Lightman’s illuminating language and crisp imagery aim to ignite a sense of wonder in any reader who’s ever pondered the universe, our world, and the nature of human consciousness. [em]Agents: Jane Gelfman and Deborah Schneider, ICM Partners. (Mar.) [/em]
close
Details