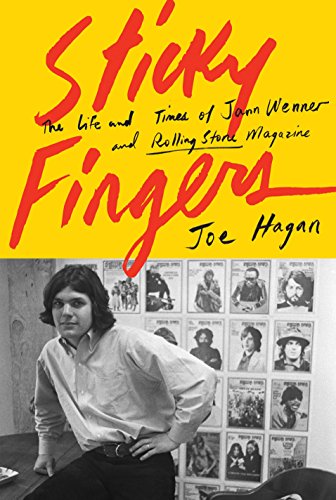 Sticky Fingers: The Life and Times of Jann Wenner and ‘Rolling Stone’ Magazine

As freelance writer Hagan posits in this searingly honest biography, Rolling Stone and its founder, Jann Wenner, turned rock stars into celebrities, fed salacious fare to slavering fans, and assembled a staff of writers (including Ralph Gleason, Greil Marcus, and Jon Landau) who elevated rock music criticism into serious writing. Wenner, who founded the magazine in 1967, was a schmoozer who was equally capable of making close friends and repelling them, as adept at publishing gushing profiles of his favorite artists as firing at those he disliked or against whom he held a grudge. Drawing on hundreds of hours of interviews with Wenner (who exercised no control over the book), his family and friends, writers who’ve worked for the magazine, and musicians, Hagan, who has written for Rolling Stone, chronicles Wenner’s fawning over Mick Jagger and aborted attempt to start, with Jagger, a British edition of Rolling Stone; Keith Richards describes Wenner and Jagger as “very guarded creatures,” but wonders if “there’s anything worth guarding.” Hagan has provided an entertaining insider’s history of a legendary magazine. (Oct.)
close
Details