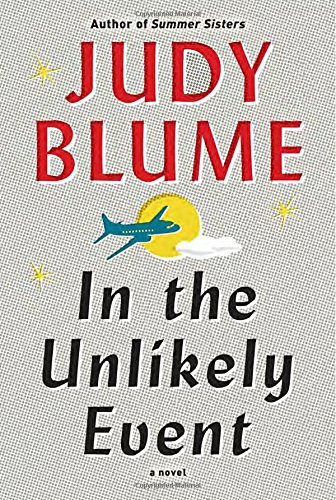 In the Unlikely Event

The three fatal plane crashes that hit Elizabeth, N.J., during the winter of 1951–52 are the inspiration for Elizabeth-native Blume's latest adult novel (the first since 1998's Summer Sisters), in which young and old alike must learn to come to terms with technological disaster and social change. The novel opens in 1987, when Miri Ammerman's return to Elizabeth for a commemorative ceremony brings back memories of the year she turned 15. In flashback, readers are brought back to the 1950s—Kate Smith, Lilly Dache, J.D. Salinger, Korea—from a variety of perspectives: Miri; her single mom; her supportive uncle; her wise grandmother; Miri's best friend, Natalie, daughter of a workaholic dentist and his shopaholic wife; Christina, a Greek girl secretly dating an Irish boy; passengers on the ill-fated planes. Miri's uncle earns recognition for reporting on the crashes in the local newspaper, but when Miri writes about the reactions at school she lands in the principal's office. Disaster produces other unexpected developments: Miri's boyfriend saves lives, while Natalie hears dead people. Maintaining her knack for personal detail, Blume mixes Miri's familiar coming-of-age melodrama with an exploration of how disasters test character, alter relationships, and reveal undercurrents of a seemingly simple world. She evokes '50s music, ethnic neighborhoods, and Las Vegas in the early days, while posing the question, how do individuals, families, and communities, deal with disaster? Her answer may not be entirely new, but her novel is characteristically accessible, frequently charming, and always deeply human. 350,000-copy first printing. (June)
close
Details