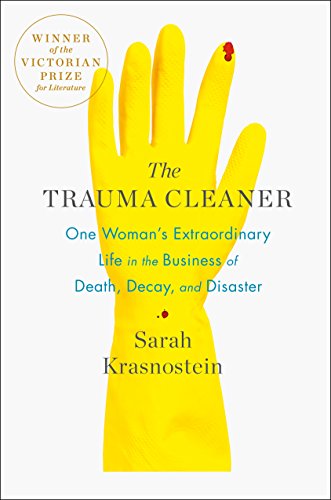 The Trauma Cleaner: One Woman’s Extraordinary Life in the Business of Death, Decay, and Disaster

Krasnostein, an Australian legal academic, profiles transgender trauma cleaner Sandra Pankhurst in this intriguing but vexing debut biography. Pankhurst runs a small business cleaning homes marred by blood, feces, drugs, mold, and garbage, but her personal history proves more fascinating. Krasnostein explores this history in chapters that alternate with cleaning-site visits. Six of the eight visits feature hoarders or squalor; two are to sites where accidental deaths occurred. Krasnostein details each site with tragic if repetitive effect, but rarely convincingly ties them to Pankhurst’s life story. Born male and subsequently adopted and abused, Pankhurst eventually landed a blue-collar job, a wife, a drug addiction, and a prostitution habit, and helped raise two children, whom he abandoned to pursue a sex-change. After undergoing surgery, Pankhurst became a funeral director, married a wealthy husband, lost a business, then started a new one. At times she displays a violent temper, cheats on her spouses, exploits her employees, dismisses other trans people, and neglects her children, leaving them in poverty. Krasnostein downplays the complexity of Pankhurst’s existence in favor of a glowing paean laden with cloying therapy-couch clichés and overwrought metaphors (“I listened to Sandra’s news like it was the middle of the Han dynasty and she had just returned west from the Silk Road”). A complex protagonist makes for engaging material, but Krasnostein’s fawning adulation minimizes and excuses her subject’s flaws in favor of creating an inspirational story that never quite rings true. (Apr.)
close
Details