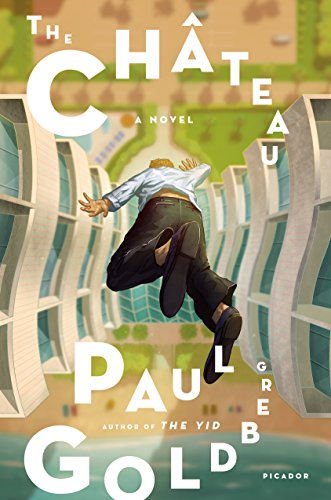 Goldberg’s second novel, after The Yid, is a salty, witty, tragic comedy that mocks Russian Jewish immigrants, Florida retirees, condo living, “Donal’d Tramp,” elderly sex, old folks who scam the early bird dinner specials, and more. Bill Katzenelenbogen, a 52-year-old science writer, has just been fired from his reporter job at the Washington Post for insubordination. Broke and depressed, he is desperate to reclaim his reputation. When he learns his college roommate, a Miami plastic surgeon (“The Butt God of Miami Beach”), died falling off a hotel balcony, Bill sees a way to turn his pal’s death into a book deal and cash. With no money, he heads down to investigate the death, staying with his estranged father, Melsor, at his crumbling Florida retirement condo, the Chateau Sedan Neuve, a stewpot of whining neighbors behaving badly. Melsor is a Russian dissident and Medicare fraudster who is determined to purge the condo board of its criminal element. Soon Bill becomes unwillingly entangled in Melsor’s schemes, commits several felonies, and wonders what his friend was thinking as he was falling to his death. Filled with gags, slapstick, and snappy repartee, this satire provides sharp commentary on American society as well as an affecting story of old people with nowhere to go and no way to get there. (Feb.)
close
Details