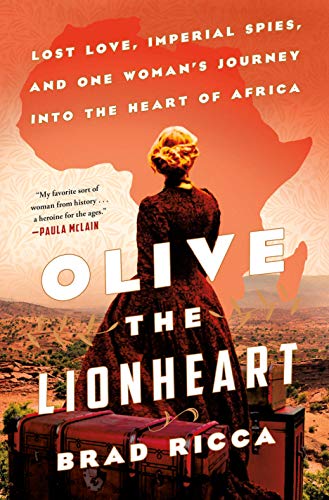 Olive the Lionheart: Lost Love, Imperial Spies, and One Woman’s Journey into the Heart of Africa

Biographer Ricca (Mrs. Sherlock Holmes) delivers an illuminating portrait of Scottish aristocrat Olive MacLeod, who set out in 1910, at age 30, to find her fiancé, the naturalist Boyd Alexander, after he went missing in Africa. Drawing extensively from MacLeod’s own diaries and letters, Ricca recreates her journey, in the company of a married couple who were more seasoned travelers, across 3,700 miles in nine months, as the trio encountered snakes, crocodiles, magic men, and sand storms, as well as the tensions between German, French, and British colonial forces that contributed to Boyd’s killing. Along the way, MacLeod discovered the Mao Kabi Falls (renamed MacLeod Falls), crossed Lake Chad in a canoe, and ascended the Hajer-el-Hamis peaks barefoot, becoming a noted explorer, archaeologist, and photographer in her own right. MacLeod’s diary, which notes, among other colorful details, the numerous times villagers who’d never seen a white woman begged her to let down her ankle-length red hair, is a remarkable resource, and Ricca makes the most of it, while also enriching the narrative with helpful insights into the era’s political, cultural, and social tensions. Fans of women’s history and adventure stories will cheer this engrossing account. (Aug.)
close
Details