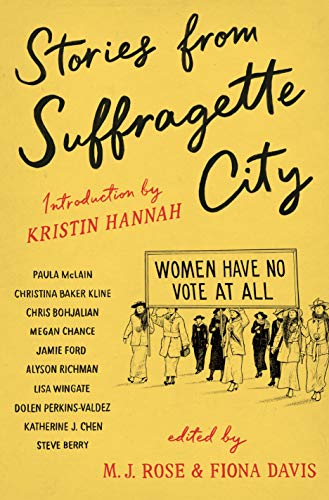 This engrossing collection, pegged to the 100th anniversary of the ratification of the 19th Amendment, brings together 12 prominent fiction writers, including Chris Bohjalian, Paula McLain, and Christina Baker Kline, all of whom contribute stories set on Oct. 23, 1915, when suffragettes marched on Fifth Avenue. In an introduction, Kristin Hannah argues that women’s push for the right to vote remains timely: “The ability to vote, and to access the polls, are fights we still face.” Many of the stories feature historical figures such as Alice Paul and Ida B. Wells, both of whom appear in Jamie Ford’s “Boundless, We Ride” and Dolen Perkins-Valdez’s standout, “American Womanhood,” each of which dramatize the bitter political compromises that would marginalize Black women from the movement’s ranks. Another highlight is Alyson Richman’s “A Woman in Movement,” about a young artist who gets her comeuppance after her advertising agency boss signs her drawings with his own name. Davis’s “The Last Mile” best drives home the collection’s overarching message: “Perhaps all these women, no matter which branch of the organization they supported, were part of a giant wave, one set to topple the status quo.” As a whole, the anthology gives assured voice and intriguing dimension to the actors of a pivotal era. (Oct.)

Correction: An earlier version of this review misspelled the names of Chris Bohjalian, Paula McLain, and Kristin Hannah.