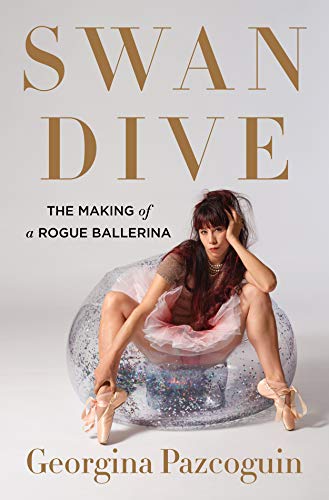 Swan Dive: The Making of a Rogue Ballerina

Pazcoguin, New York City Ballet’s first Asian American female soloist, reveals the grimy underbelly of elite stagecraft and the extreme passions that fuel it in this rollicking debut. She affectionately recounts her 1980s childhood in Pennsylvania, where she started dancing at age four. (“I didn’t know what I was doing, but... I wanted to move this way all the time,” she recounts.) At age 13, Pazcoguin attended the School of American Ballet in New York, where she thrived under the grueling regimen but felt battered by racism and body shaming, including one instance in which the artistic director said “you don’t really fit in from here... to there,” pointing to her thighs. She also exposes the truth about ballet’s sequins and tulle: costumes go unwashed for years, and the glittering snow in The Nutcracker (which she calls the “NUTBUSTER” because it’s such a grind) is swept up and dumped right back onto dancers’ heads the next night. Pazcoguin’s humorous asides entertain, though at times they can undermine the abuse she endured. (“I’ve felt the pain... I’ve even farted onstage and survived.”) While the juicy details of beautiful people behaving badly are beguiling, it’s Pazcoguin’s unsparing criticism of the industry that begs an encore. This is potent stuff. (July)