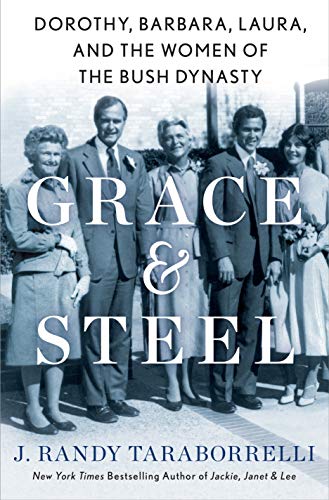 Grace & Steel: Dorothy, Barbara, Laura, and the Women of the Bush Dynasty

Biographer Taraborrelli (The Kennedy Heirs) delivers a detailed and largely flattering group portrait of the Bush family matriarchs. Dorothy Wear Walker Bush (1901–1992), the wife of senator Prescott Bush and mother of George H.W. Bush, became famous in her own right as a syndicated newspaper columnist. According to Taraborelli, George H.W. Bush’s political success can be credited in large part to the unwavering support of his wife, Barbara Bush (née Pierce; 1925–2018), who suffered from lifelong depression, the loss of a child to leukemia at age three, and insecurities about her appearance, yet became one of the most beloved first ladies thanks to her literacy initiatives and “grandmotherly quality.” Though Barbara wasn’t the easiest mother-in-law to warm up to, according to Taraborelli, she helped her daughter-in-law, Laura Bush (née Welch), wife of George W. Bush, to find her footing as first lady and become an active advisor in her husband’s presidency. Taraborrelli’s breathless prose (“Barbara was nothing if not a real patriot; some might even call her an American icon”) occasionally mars his deep research and fluid pacing. Still, this is a unique and colorful look at one of America’s most powerful political families. (Mar.)