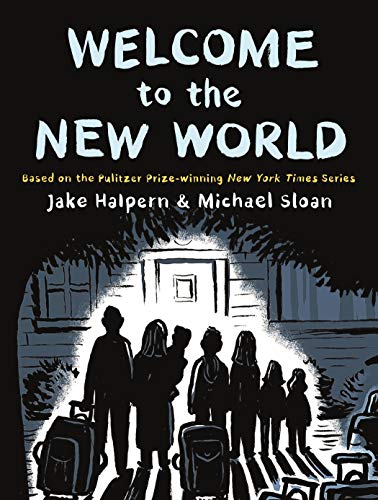 Welcome to the New World

This perceptive work of graphic journalism from Halpern (Bad Paper) and Sloan (Zen of Nimbus series) expands on their Pulitzer-winning New York Times series, which follows one refugee family, the Adalbaans, on their journey from war-torn Syria to Connecticut on the eve of Donald Trump’s election. Once arrived, they are given an absurd three months to find work and integrate into American life before their aid runs out. At the center is Naji, the oldest son of Ibrahim and Adeebah, whose pop-culture-driven American dream gets a sharp reality check when he encounters bullies and boredom. Some elements of the story are all too familiar among immigrant narratives—the humiliation of scrounging for work, terrifying encounters with racist harassment—but Halpern and Sloan’s smart use of humorous and heart-wrenching details particularize the family’s story while effectively conveying their political message. For example, Adeebah has many legitimate fears about life in Connecticut, but she is also very worried about bears (she’s heard rumors they invade yards). And when an elderly neighbor shows Naji her Life Alert bracelet, Naji imagines fleeing Syrians pressing buttons on their wrists as they escape a burning city. Moments like this underscore the world’s inequalities while uplifting idiosyncratic moments of connection. Sloan’s loose-lined art is simple but evocative both in poignant and playful scenes. For readers raised on Persepolis, this moving documentary portrait hits home. (Sept.)

Correction: An earlier version of this review mischaracterized how much of the book originally appeared in the New York Times.