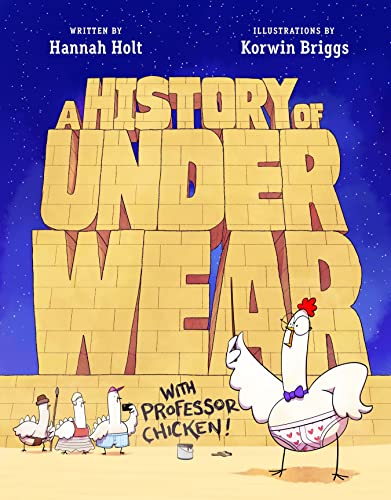 A History of Underwear with Professor Chicken

A fowl marches across time and space shedding new light on the history of people’s intimate relationship with intimate apparel. As Briggs’s crisp cartoons portray poultry-dominated peoples, Professor Chicken (who sports a bow tie, but not underpants) touches on subjects including why underwear is still referred to as a “pair,” as well as the evolution of innovation and taste that led from the loincloth to the codpiece (“fancy underwear on the outside”) and, eventually, the thong. Though the text fails to initially define specific terms (farthingale, panniers, stays), Holt writes with a relish for juicy facts and irreverent wordplay (about the loincloths buried with King Tut: “That’s a lot of Fruit of the Tomb”). But she also makes a compelling case for the historicity of material culture: how even mundane items can speak volumes about a society’s technologies, class structure, and commitment to sustainability. Ages 3–9. (Feb.)

This review has been updated to correct the illustrator's last name and a line about the book's layout.