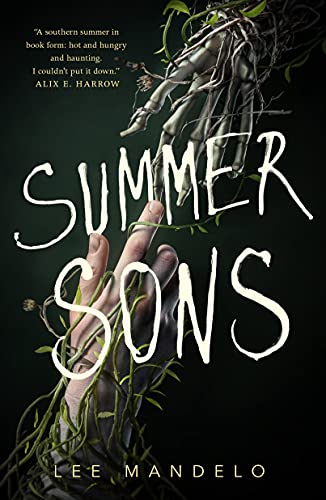 Mandelo brings a queer goth aesthetic to the Southern gothic in their slow-building, brooding contemporary fantasy debut—with drag-racing, drug-use, and plenty of ghosts to boot. When Eddie Fulton dies of an apparent suicide, his best friend Andrew Blur inherits his fortune, house, roommate, research topic at Vanderbilt’s graduate program—and frightening sensitivity to ghosts. Andrew is convinced that Eddie didn’t kill himself, and as he delves into the mystery of Eddie’s death, no one is above suspicion and investigation, especially not Eddie’s handsome, charismatic, and reckless friend Sam Halse. Torn between the bright halls and shady academics of Vanderbilt and the dark streets and drug-fueled parties of Sam and his gang, Andrew must confront his past with Eddie in order to avenge his friend and conquer his own demons, both psychological and paranormal. Despite the high-speed car races that wind through the novel, the first half drags at a snail’s pace. Things pick up considerably in the second half, gaining urgency and narrative complexity, but the central mystery provides few interesting twists. Instead, the novel shines in the tortured love triangle between Andrew, an intriguing stranger, and the ghost that haunts him. Full of angst and lingering spirits, Mandelo’s debut is like Tennessee molasses—dense, dark, slow-moving, and with a distinct Southern flavor. [em](Sept.) [/em]
close
Details