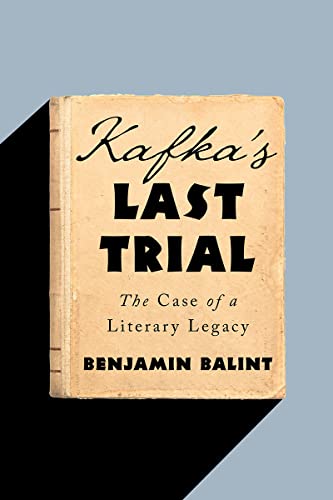 Kafka’s Last Trial: The Case of a Literary Legacy

Balint (Running Commentary), a research fellow at the Van Leer Institute in Jerusalem, delivers a lively and balanced account of the international battle—fought in Israeli courts—for Franz Kafka’s manuscripts, letters, and diaries. Heard in 2016, the case involved three parties: the National Library of Israel, the German Literature Archive in Marbach, and Eva Hoffe, who inherited the documents from her mother. But the story begins much earlier, in 1924, when Kafka died of tuberculosis and his close friend, Max Brod, could not bring himself to follow Kafka’s last instructions to burn his remaining papers. Instead, Brod devoted most of his life to promoting Kafka’s legacy. When Brod, who fled to Palestine during WWII, died in Tel Aviv in 1968, Kafka’s papers passed to Brod’s secretary and confidante, Esther Hoffe, Eva’s mother. In addition to relating this background, Balint thoughtfully examines the arguments brought up at the trial: what Judaism meant to Kafka, who wrote in German, “steeped himself in German literature,” and wondered, in his diary, what he had in common with other Jews, yet discovered a love of Yiddish theater and Hebrew; Israel’s ambivalence to Kafka and diaspora culture; and the ways both Israel and Germany claimed Kafka’s legacy. Well-researched and insightful, this suspenseful work illuminates the complex relationship between literature, religion, culture, and nationality. (Sept.)
close
Details