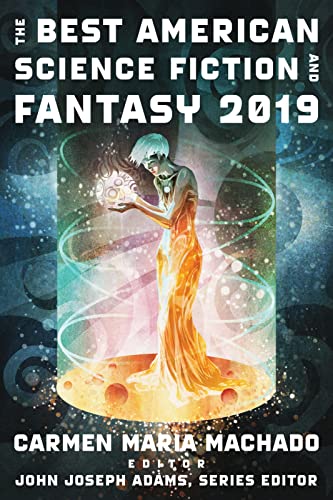 For this fifth anthology of outstanding American genre fiction, series editor Adams is joined by guest editor Machado, who winnowed down 80 contenders into 20 finalists, 10 each from the U.S. and Canada. Machado’s selections lean toward the experimental, the literary, and the boundary-pushing. Standouts include Annalee Newitz’s “When Robot and Crow Saved East St. Louis,” in which a drone befriends both humans and crows to combat inner-city epidemics; LaShawn M. Wanak’s “Sister Rosetta Tharpe and Memphis Minnie Sing the Stumps Down Good,” an alternate history piece in which singers are pressed into service against deadly spores; Sarah Gailey’s “STET,” which explores grief through the form of a scientific paper; Lesley Nneka Arimah’s “Skinned,” a provocative piece about the role of women in a patriarchal African society; Sofia Samatar’s “Hard Mary,” in which Amish-like girls adopt a broken android; and P. Djèlí Clark’s introspective history piece, “The Secret Lives of the Nine Negro Teeth of George Washington.” Despite the “American” label, there’s a decidedly global, multicultural feel to these pieces, which exemplify diversity and representation. As Machado says in her introduction, “Here you will find an undeniable bias towards the use of formal constraints, vibrant and muscular prose, ambitious weirdness.” In exploring the potential of the genre and challenging expectations, this anthology isn’t for everyone, but it’s a masterful showcase of what’s possible. (Oct.)
close
Details