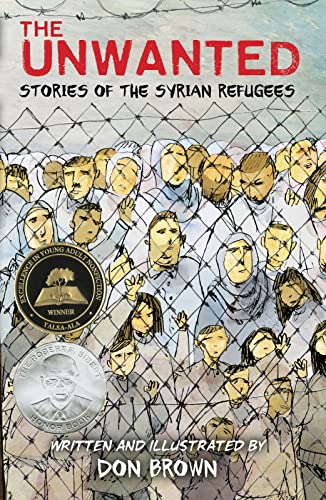 The Unwanted: Stories of the Syrian Refugees

The author of Drowned City again humanizes a story that can seem remote and incomprehensible: this time, the Syrian refugee crisis. Brown outlines the conflict, going back almost a decade: teenagers protested nonviolently, the government responded with brutal repression, the violence spread, other forces entered the conflict. A wave of Syrians sought refuge in Turkey, Lebanon, and Jordan (“Just walk. Don’t breathe”); later, more attempted, at the hands of unscrupulous smugglers, to cross the Mediterranean in the hope of reaching Germany and Sweden. Eventually, “Europe sees sympathy for Syrian refugees fall.” Brown does not fictionalize (an appendix includes extensive source notes and references), and he pulls no punches: “I tried to catch my wife and children in my arms,” says a grief-stricken man floating in the ocean, “But one by one, they drowned.” In one hopeful example, a 10-year-old makes it to safety in Canada, where she “takes up skating and enjoys Halloween,” but hundreds of thousands of others languish in camps. In loosely drawn panels, Brown captures the migrants as they march over land or huddle in boats, zeroing in on their expressions of fear and exhaustion as he documents the way war’s effects spread far beyond the battlefield. Final art not seen by PW. Ages 14–up. Agent: Jennifer Laughran, Andrea Brown Literary Agency. (Sept.)
close
Details