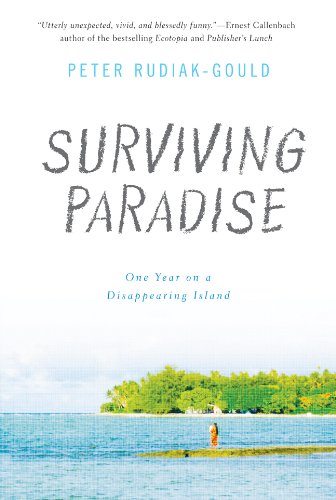 Surviving Paradise: One Year on a Disappearing Island

Thousands of miles from home and in a culture equally distant from his own, Rudiak-Gould's first night on the island of Ujae made him lonely “to the point of physical pain.” Yet after only a few weeks in the farthest outreaches of the Marshall Islands, the author “overcame boredom almost immediately,” bringing the reader along on an equally gripping journey of one year in one of the most remote, fascinating places on Earth. Rudiak-Gould, a volunteer English teacher, came to Ujae knowing little about the Marshallese language and even less about its culture. Yet as he became more familiar with his surroundings and the native tongue, he found a community that eventually saw him as one of their own. Nearly every aspect of Ujae is dissected, from its horrific educational standards to the drastic differences in their respective social systems and the eclectic array of Marshallese food (Rudiak-Gould describes one dish as “liquid flatulence”). Rudiak-Gould also lets the reader in on his own personal struggles in dealing with children (and their parents) in a place where corporal punishment is encouraged. At the same time, he becomes adept at Marshallese activities like spearfishing, allowing him to contribute to a “culture based on survival.” Alternatively hilarious, emotional and thought provoking (Rudiak-Gould analyzes the potentially catastrophic effects of global warming on the low-lying area), the book is an eye-opening look into a beautiful yet harsh paradise far from the reaches of tourism.