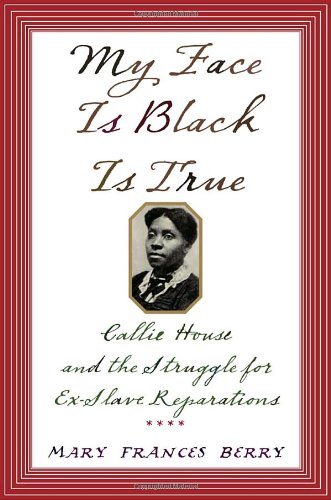 My Face Is Black Is True: Callie House and the Struggle for Ex-Slave Reparations

The African-American struggle for compensation for years of unpaid labor began at the dawn of emancipation. In this account of "the first mass reparations movement led by African Americans," historian and lawyer Berry ( ), who chaired the U.S. Commission on Civil Rights, unearths the intriguing story of Callie House (1861– 1928), a Tennessee washerwoman and seamstress become activist, and the organization she led, the National Ex-Slave Mutual Relief, Bounty and Pension Association. Not much is known about House's private life; to re-create it Berry extrapolates from historical knowledge of ex-slaves building schools and churches, forming mutual aid societies, attempting to secure the vote, trying to find adequate employment and managing to survive violent repression. The association's public record is more detailed. House was familiar with the work of Walter Vaughan, a white Democrat interested in giving a boost to the postbellum Southern economy, who "first proposed the ex-slave pension," and House set out "to put the name of every ex-slave on a petition asking Congress to pass a bill providing pensions." As the organization grew, so did government harassment by postal authorities, who succeeded in convicting House of mail fraud. Callie House and her historic role deserve to be brought out of the shadows, and Berry achieves that superbly. Students and scholars of African-American history, as well as those engaged in the current reparations debates, will be deeply informed by the rise and fall of the Ex-Slave Association. .