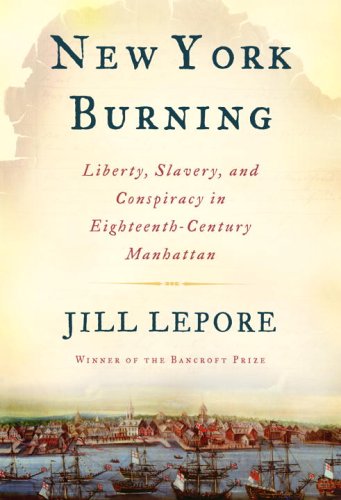 With riveting prose and a richly imagined re-creation of a horrible but little-studied event, Bancroft Prize–winning historian Lepore ( ) deftly recounts the circumstances surrounding a conspiracy in pre-Revolutionary Manhattan. In 1741, its teeming streets erupted into fire in at least 10 locations. At first, rival political parties blamed each other for the conflagrations, but they joined forces against black slaves when a young white woman named Mary Burton testified that she had witnessed several slaves conspiring to kill whites and gain their liberty. The colony's leaders arrested and tried at least 100 black men and women. Eventually, the colonial Supreme Court sentenced 30 men to death; 17 were hanged (along with the four supposed white ringleaders) and 13 burned at the stake, based solely on Burton's testimony. Out of fear, several slaves testified against others, and the bulk were sent into brutal slavery in the Caribbean. Drawing primarily on New York Supreme Court justice Daniel Horsmanden's Lepore demonstrates that whites' fear of black rebellion led them to blame any threat to the colony on the activity of slaves. In this first-rate social history, Lepore not only adroitly examines the case's travesty, questioning whether such a conspiracy ever existed, but also draws a splendid portrait of the struggles, prejudices and triumphs of a very young New York City in which fully "one in five inhabitants was enslaved." 17 illus., 1 map