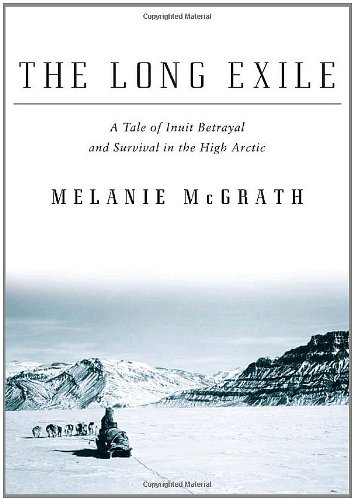 The Long Exile: A Tale of Inuit Betrayal and Survival in the High Arctic

In this riveting tale of Canadian bureaucracy and cultural arrogance, British journalist McGrath ( ) tells how in 1953 a handful of Inuit families were coerced from Hudson Bay's eastern shore and relocated 1,500 miles north to bitterly rocky and icy Ellesmere Island—the world's ninth-largest island. Sold as a humane attempt to provide a livelihood for the Inuit when fox pelt prices plummeted, the scheme was, in fact, callously political. Canada wanted to plant the flag—and some people—on the uninhabited and largely impenetrable island, over which Greenland, Denmark and the United States had territorial aspirations, particularly as the Cold War intensified. A compact history of northern life adds context to the story of horrific exile, which McGrath humanizes by focusing on Josephie Flaherty, the mixed-race son of an Inuit mother and of American director Robert Flaherty, who created the cinematic sensation in the 1920s. McGrath's account of inhumane deprivation is based on contemporary documents and astonishing interviews with survivors, who after decades of pleading to be repatriated to their homeland finally forced public hearings in 1993 that shocked Canadians and culminated in the 1999 creation of Nunavut, the world's only self-governing territory for indigenous people.