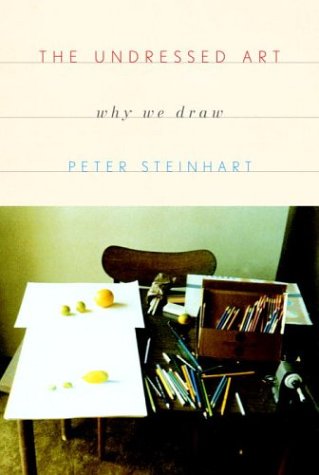 THE UNDRESSED ART: Why We Draw

With the triumph of photography and the retreat of representation from "serious" visual art, the place of drawing as a central and necessary human activity might appear to be under some threat. Yet naturalist Steinhart's lively and gently polemical book shows it to be positively thriving, most passionately (and unexpectedly) in "drawing groups" that meet all over the country to sketch models and discuss technique. Steinhart ( ) is himself the enthusiastic member of such a group, and details of their rearguard defense of drawing traditions are the affectionately rendered center of the book. Moving from his own experiences to art history, science and the lives of the artists and models with whom he comes in contact, Steinhart examines this resurgence not only as an exercise in cultural self-expression but a collective response to a fundamental human need. Along the way, he gives quick but informative sketches of the world of children's drawing, the physiology of facial recognition and the evolution of photography. But the book's true milieu is the studio, and its core subject the complex relationships between hand, brain, eye and subject in the drawn depiction of the human figure. The fascinating life of the figure model Florence Allen (who not only posed over a period of many years for everyone from Diego Rivera to Richard Diebenkorn, but helped organize her colleagues into a professional guild) shows a side of the art world rarely explored with such sympathy and depth. And if Steinhart partakes a little of the "Us vs. Them" opposition to the contemporary art world common among his peers, he doesn't make a big deal out of it. For him, a drawing bound for the fridge door is taken as seriously as a painting in the Prado. 31 illus.