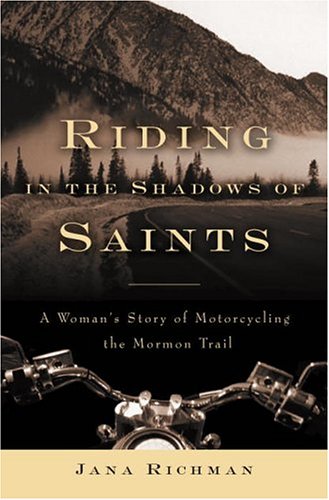 Riding in the Shadows of Saints: A Woman's Story of Motorcycling the Mormon Trail

Raised a Mormon, Richman had heard stories of her seven great-great-grandmothers walking from Nauvoo, Ill., to the promised land of Salt Lake City in the mid-19th century. Long after leaving the religion and going through a middle-age pensive period, Richman, whose writing has appeared in the , decided to make the same journey, albeit alone and on a motorcycle. The result is a mixture of roadtrip musings, quirky adventure tales and spiritual reflections, with a healthy dose of unresolved family issues. It's an unusual blend, and those who aren't curious about traveling by motorcycle may find themselves skimming through the parts about driving in the rain or why more women should ride Harleys. But Richman's other adventures—both physical and spiritual—prove universally compelling. Especially notable are her thoughts on religion, which have a refreshing air of detachment. As Richman's trip progresses, she goes deeper into self-reflection, finally admitting that an "hour's ride offers more introspection than a year's worth of expensive therapy." She gradually unravels her emotions about her mother, a devout Mormon disappointed in Richman's lack of faith, reaching a resolution by the time Salt Lake City emerges on the horizon. Map.