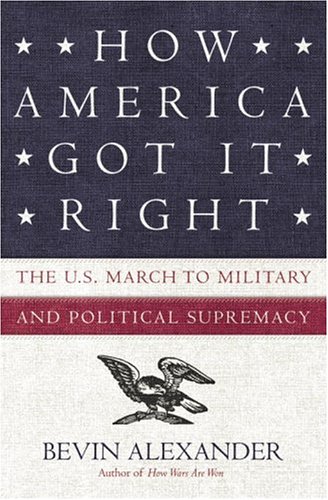 How America Got It Right: The U.S. March to Military and Political Supremacy

In this polemical, sometimes informative overview of U.S. military and diplomatic history from the French and Indian Wars to the war in Iraq, westward expansion was inevitable; the Mexican War was wise; slavery "did deflect and distort the dream," but the Civil War need not have been fought (though it did professionalize the army). After WWI "the United States took over responsibility from Britain for governing the world's oceans"; this expanded navy turned out to be crucial for winning WWII. Almost all nonexperts will learn something from Alexander's ( ) brisk and detailed accounts of 20th-century battles and diplomatic controversies, and his expertise on postwar China and Korea provides support for surprising arguments. As he approaches the present day, however, he sounds less sure than merely cocksure: "the United States had to go into Iraq," he writes, because "it set out to neutralize terrorism and tyrants." Readers who already think so will enjoy the book. .