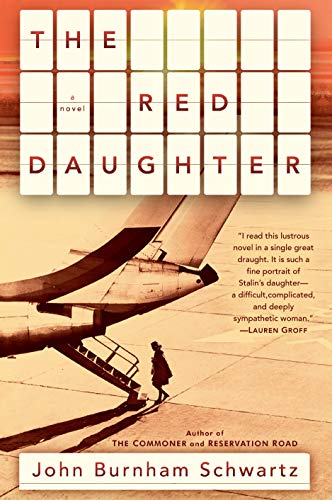 In this gripping historical about the defection of Stalin’s only daughter, Svetlana Alliluyeva, Schwartz (The Commoner) explores the wider political context that sharpens private tragedy. In 1967, the author’s father, lawyer Alan U. Schwartz, accompanied Alliluyeva from Switzerland to the U.S., setting off a firestorm of media attention and controversy. Told via Svetlana’s fictionalized journals, the story follows Svetlana, who, at age 41, abruptly abandons her homeland for the U.S., leaving her two children behind in hope that they can have a fresh start under a new identity. While attempting to hide her past from those she meets in the U.S., Svetlana also longs for connection. But after a short time working in Princeton, N.J., where she writes and gives lectures, she impulsively accepts an invitation to the cultlike fellowship run by Franklin Lloyd Wright’s widow at Taliesin West in Arizona. While Alliluyeva gains lovers, friends, and has another child, she never fills the void created when she left Russsia and her family behind. With CIA minders never far, the fraught political relationship between Alliluyeva and the U.S. government provides another layer of intrigue. But this lovely novel’s strength is the aching portrait of Svetlana: “not American, not Russian, neither this thing or that thing but always now between these things, which is the tragedy of my life.” Filled with historical details that enliven and ground the fictionalized elements, Schwartz’s elegant novel captures the emotion and strain of Alliluyeva’s second life in the U.S.. (Apr.)
close
Details