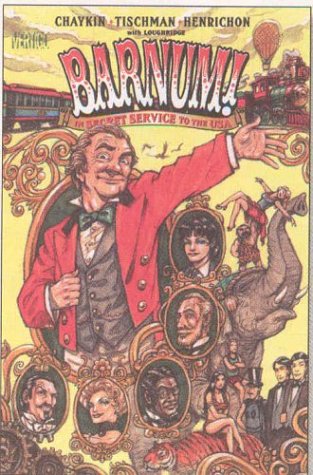 BARNUM!: In Secret Service to the USA

Who knew that amid the bearded lady, the wolf boy and the human fly at Barnum and Bailey's circus, there was also a secret agent? After P.T. Barnum saves President Grover Cleveland's life, he becomes the president's newest agent to help thwart an attempt to destroy the Union. Aided by Span the human fly, diminutive powerhouse Colonel Dyna-Mite, Hypnosia the mesmerist, Plastino the rubber man, Primeva the animal mistress and Siamese twins Chang and Eng, Barnum hopes to defeat the evil Nikola Tesla. The traveling sideshow may be America's last hope. Barnum's set-up is the perfect guise to gather information from across the United States and keep tabs on Tesla and his diabolical plans. Circus folk are often depicted as criminals and other undesirables, but in this tale writers Chaykin and Tischman delightfully turn the tables and put the freaks on the same side as the law where they can use their skills of deception and illusion to gain information against Tesla. Also fitting are the illustrations, akin to old Civil War posters or hand-drawn pictures. Henrichon fills each page with a classic art style that is a nod to history. Whereas Chaykin and Tischman have an ear for 19th-century dialogue, Henrichon has a hand in believable renderings of not just the characters, but their dress and environment. This handsome edition will delight enthusiasts of the circus, comics or American history.