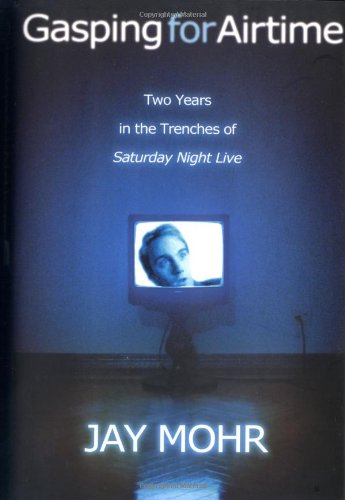 GASPING FOR AIRTIME: Two Years in the Trenches of Saturday Night Live

Twenty-three-year-old actor and stand-up comic Mohr was playing college campuses after a brief stint hosting an MTV game show when he landed every comic's dream job: featured performer and writer on . In this stilted but honest memoir, he chronicles his frustrating two seasons on the show, from 1993 to 1995. Few of his sketches aired, and aside from his impressions of Ricki Lake, Christopher Walken and Dick Vitale, he was rarely on camera. (When he was on air, he admits, he often couldn't keep a straight face.) Mohr treats readers to some affectionate, entertaining tales of the late Chris Farley, but his book is less a juicy inside story of the comedy institution than a tale of an immature young man's struggle with a high-stress, erratic workplace: "The schedule for putting together was made back in the seventies when everyone was on coke.... Problem was, no one did coke [anymore] and we were expected to keep the same hours." Floundering in the unstructured work environment, Mohr suffered crippling panic attacks, which he treated with alcohol and pot until he finally found real relief with a prescription for Klonopin. Even panic-free, Mohr still felt like the odd man out and chafes at his less than meteoric rise. He serves up mostly superficial dish (watching Nirvana rehearse, shooting hoops with various celebrities) and offers unflattering self-revelations (desperate competitiveness, jealousy and sulking)—resulting in a memoir that will appeal only to die-hard Mohr fans.