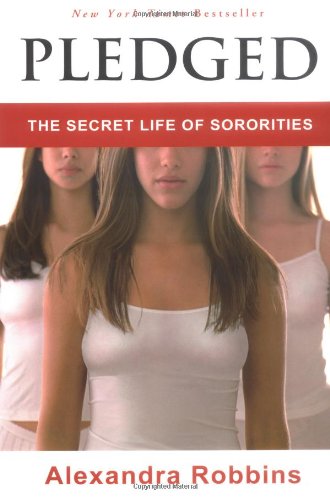 PLEDGED: The Secret Life of Sororities

Robbins, who previously researched Yale's Skull and Bones Society for and also coauthored , went undercover for the 2002–2003 academic year to investigate the inner workings of "Greek" (National Panhellenic Conference) sororities. Sororities are far from anachronisms; there are presently some 3.5 million women in almost 3,000 Greek chapters on campuses across America. After the national office forbade locals from cooperating with Robbins, she disguised herself as an undergrad and found four sorority women willing to risk expulsion to help her. While Robbins structures her narrative around the year's ritual cycle—the rush, the bid, pledging, initiation, Greek Week, etc.—the timeless soap opera of sorority life occupies center stage. And although battles between girls can be wrenching, there's nothing like a date gone wrong to bring out the tears—and the thermos of vodka. Beyond romance, Robbins's informants have their own issues, among them, being black and poor in a rich white sorority and recovering from date rape by a frat brother. These problems are worsened by an environment that encourages binge drinking, drug abuse, eating disorders and blind obedience to what their pledge masters or sorority elders tell them to do. Historically black sororities, which are not the focus of this book, do have a reputation for promoting community service and sisterhood; "historically white" sororities, Robbins concludes, are really just social groups for making friends and meeting guys, despite their claims to academic and service values. Robbins makes suggestions for reforming sororities—more adult supervision, ending pledging, etc.—although the demystification that comes from reading her front-line account may be the best prescription.