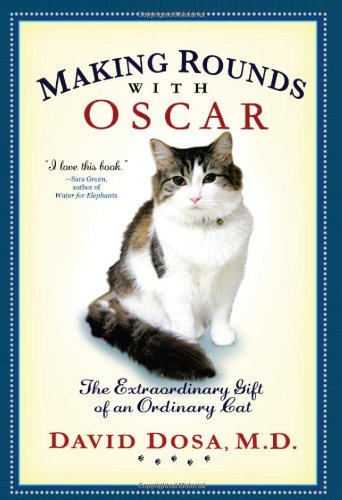 Making Rounds with Oscar: The Extraordinary Gift of an Ordinary Cat

Dosa, a geriatrician with a strong aversion to cats, tells the endearing story of Oscar the cat, the aloof resident at a nursing home who only spends time with people who are about to die. Despite hearing numerous stories about Oscar's uncanny ability to predict when a patient's time is nearing, Dosa, ever the scientist, remains skeptical. Slowly, he starts to concede that there may be something special about Oscar. Dosa starts to pay more attention to the cat's decidedly odd behavior, noticing that Oscar seeks out the dying, snuggles with the patient and family members until the patient passes; with others, he smells the patient's feet, sits outside a closed door until admitted, or refuses to leave a dying patient's bed. Dosa discovers how powerfully Oscar's mere presence reassures frightened or grieving family. Ultimately, the good doctor realizes that it doesn't matter where Oscar's gift comes from; it's the comfort he brings that's important. This touching and engaging book is a must-read for more than just cat lovers; anyone who enjoys a well-written and compelling story will find much to admire in its unlikely hero.