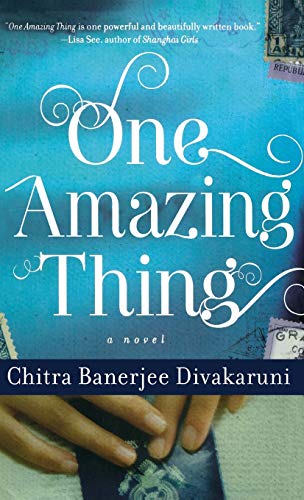 In a soggy treatment of catastrophe and enlightenment, Divakaruni ( ) traps a group of nine diverse people in the basement of an Indian consulate in an unidentified American city after an earthquake. Two are émigrés who work for the consulate; the others are in the building to apply for visas. With very little food, rising flood water, dwindling oxygen, and no electricity or phone service, the victims fend off panic by taking turns at sharing the central stories of their lives. Oddly, the group spends little time brainstorming ways to escape, even when they run out of food and water, and sections of ceiling collapse around them. They wait in fatalistic resignation and tell their tales. Some are fable-like, with captivating scene-setting and rush-to-moral conclusions, but the most powerful are intimate, such as the revelations an accountant shares about his impoverished childhood with an exhausted mother, her boyfriend, and a beloved kitten. Despite moments of brilliance, this uneven novel, while vigorously plumbing themes of class struggle, disillusionment, and guilt, disappoints with careless and unearned epiphanies.