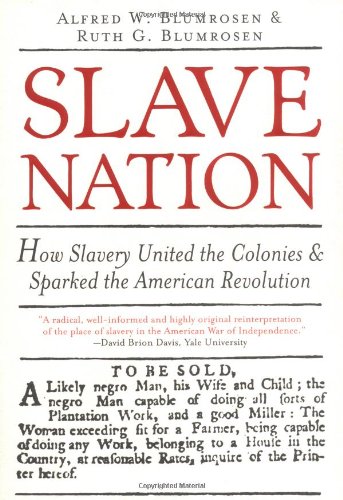 SLAVE NATION: How Slavery United the Colonies and Sparked the American Revolution

Two law professors make slavery the motor driving the Revolutionary period in this provocative if not always convincing study. Southern colonists, they contend, feared that British court rulings against slavery in the motherland and newly assertive British claims of legislative supremacy over the colonies meant that Britain would restrict or abolish slavery in America; they therefore took the lead in pushing for outright independence and demanded assurances from Northern colonies that slavery would be protected in the new nation. Slavery also dominated the Constitutional Convention, which only succeeded, the authors argue, because of an informal grand compromise giving the South the three-fifths clause (counting slaves toward a state's House representation) in exchange for the Northwest Ordinance banning slavery north of the Ohio River—and implicitly permitting it to the south. Blaming spotty records and backroom deal making, the authors often build their case on speculation, circumstantial evidence and interpretations of Revolutionary slogans about "liberty" and "property" as veiled references to slavery; they must often argue around documentary evidence showing Revolutionary leaders' preoccupation with other controversies that did not break down along North-South fault lines. Their reassessment of the centrality of slavery during the period is an intriguing one, but many historians will remain skeptical.