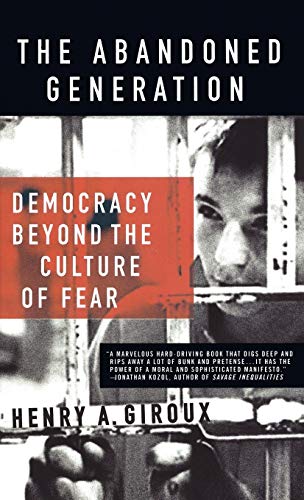 The Abandoned Generation: Democracy Beyond the Culture of Fear

In this critique of the American political and economic systems' influence on the lives of the country's youth, Penn State education professor Giroux argues for his long-standing, leftist social agenda within the context of the current political climate. He berates President Bush for his""war on terrorism,"" which he argues diverts funding and the public's attention from more basic concerns.""Security also means healthy, educated, and safe children,"" he writes,""and terrorism also includes what can be called the 'terrorism of everyday life,'... the suffering and hardships experienced by millions of adults and children who lack adequate food, health care, jobs, child care, retirement funds, and basic living quarters."" Furthermore, the antiterrorist campaign""depoliticizes politics itself,"" harming the very democracy by which this country defines itself. After the opening chapters, the author loses his timely post-September 11 hook and digresses about the privatization of public schools and the commodification of higher education, and their downside for the country's youths. His writing is strongest when he stays close to the facts, offering statistics and monetary figures to back his critique of the government. Contrarily, it's reductive and ineffective when he devotes entire chapters to dissecting single Hollywood movies (e.g., Ghost World and Baby Boy) for insight into American culture. Though Giroux supports his opinions with quotes from the Children's Defense Fund and philosopher Jacques Derrida, his tone is often heavy-handed and too academic. The book may appeal only to those already in the same political camp.
close
Details