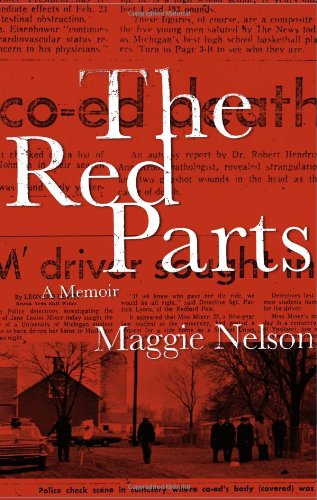 The Red Parts: A Memoir

The grisly 1969 Michigan murder of 23-year-old law student Jane Mixer is evocatively re-examined here by her niece, poet Nelson, in light of new evidence in the case. Just as Nelson was completing a book of poetry about her aunt in 2004 ( )—after 35 years of a closed case for which John Collins had been convicted in 1970—new DNA evidence linked a retired, now elderly nurse, Gary Leiterman, to Mixer's murder. Nelson's intimate memoir chronicles how she and her mother, older sister Emily and grandfather managed to harness their emotional pain and "bear witness" at the Ann Arbor trial and conviction of Leiterman. Nelson's search for answers in the murder of Mixer, who hitched a ride from a stranger and was shot twice at close range, strangled, then dragged to a cemetery, dilates into excruciating details about other cases of girls missing and mutilated. Nelson's cathartic narrative encompasses closure of unrelated events in her own life, such as mourning her dead father, dealing with a recent heartache and reconciling with her once-wayward sister. Her narrative is wrenching, though readers come no closer to understanding the character of Mixer or the motive for her murder.