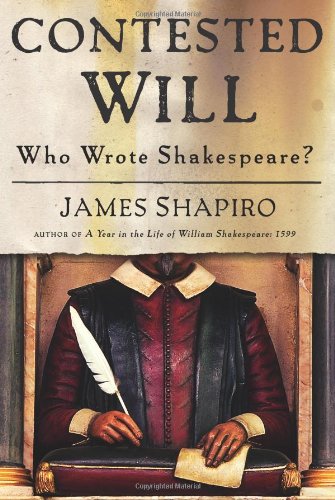 Contested Will: Who Wrote Shakespeare?

Shapiro, author of the much admired achieves another major success in the field of Shakespeare research by exploring why the Bard's authorship of his works has been so much challenged. Step-by step, Shapiro describes how criticism of Shakespeare frequently evolved into attacks on his literacy and character. Actual challenges to the authorship of the Shakespeare canon originated with an outright fraud perpetrated by William-Henry Ireland in the 1790s and continued through the years with an almost religious fervor. Shapiro exposes one such forgery: the earliest known document, dating from 1805, challenging Shakespeare's authorship and proposing instead Francis Bacon. Shapiro mines previously unexamined documents to probe why brilliant men and women denied Shakespeare's authorship. For Mark Twain, Shapiro finds that the notion resonated with his belief that John Milton, not John Bunyan, wrote Sigmund Freud's support of the earl of Oxford as the author of Shakespeare appears to have involved a challenge to his Oedipus theory, which was based partly on his reading of . As Shapiro admirably demonstrates, William Shakespeare emerges with his name and reputation intact. 16 pages of b&w photos.