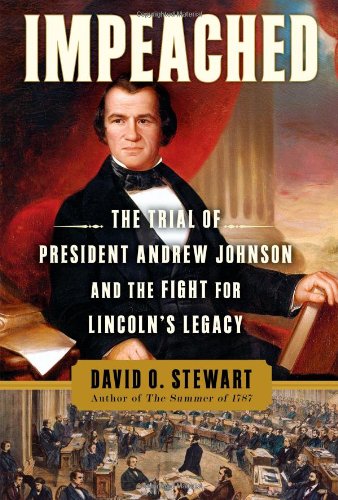 Impeached: The Trial of President Andrew Johnson and the Fight for Lincoln's Legacy

Fresh from his masterful , Stewart takes on one of the seamiest events in American history: the vengeful impeachment of Lincoln's successor as president; the Senate failed to convict Andrew Johnson by a single vote. At issue was the continuation of Lincoln's plans to reintegrate the South into the union after the Civil War. But also at stake, as always, was party politics. Stewart takes readers through a tangled web of motives and maneuverings in lively, unadorned prose. He's skilled at characterizing his large cast of characters and, as a lawyer, has a practiced nose for skullduggery, of which there was much. Corruption deeply marred the entire impeachment effort. Justifiably, Stewart holds his nose about most of the people involved and admires few of them. As he sums it up, in 1868 “none of the country's leaders was great, a few were good, all were angry, and far too many were despicable.” Stewart offers little analysis and advances no new ideas about what he relates, but he tells the story as well as it's ever been told. B&w photos.