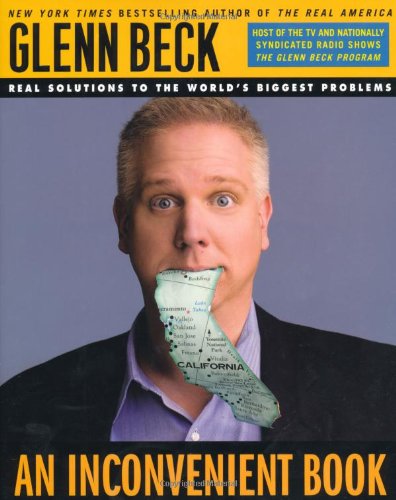 An Inconvenient Book: Real Solutions to the World's Biggest Problems

In this appraisal of America's woes, conservative TV and talk-radio host Beck ( ) lays lighthearted siege to everything that makes the world worse. “[P]olitical correctness is the biggest threat this nation faces today,” he declares, as it makes us prey for Islamic fundamentalists, renders taboo the roots of our economic troubles (poor people are, in fact, lazy, he argues) and creates rampant distortion in the media. Beck goes paragraph for paragraph with global-warming alarmist Al Gore, merrily slaughtering the sacred cows of the environmentalist crowd. Not sated by the hide of the former vice president, he goes after everything and everyone from poverty to “perverts,” offering solutions to these and other problems (e.g., “the key to success in the capitalist system is to believe in it”). While often informative, as in his chapter on global warming, Beck is sometimes tedious, particularly when dealing with Islam and education (“France is literally teetering on the edge, and our biggest ally, England, is about to be turned inside out as well”). He's at his best when most absurd, and funniest when he's his own target (the father of four is “little more than a flesh-and-bone jungle gym”). This should make a good read for conservatives.