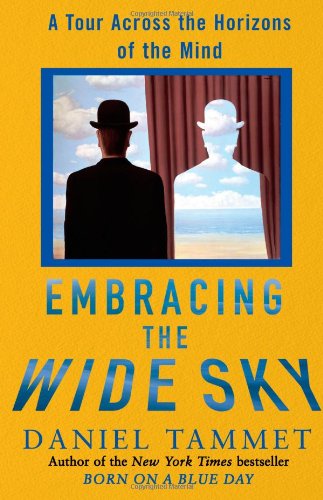 Embracing the Wide Sky: A Tour Across the Horizons of the Human Brain

In 2004, autistic savant Tammet reeled off 22,514 digits of pi from memory, setting a European record. How did he achieve such a feat? Is an autistic mind different from others? Yes and no, Tammet answers in this follow-up to his bestselling memoir, . His own brain may be wired a little differently, but we are all capable of remarkable mental feats, he asserts. Tammet seamlessly blends science and personal experience in a powerful paean to the mysteries and beauty of the brain. Intelligence is a complex phenomenon that synthesizes various skills and abilities. Tammet illustrates this with his own abilities in memory, language and number sense. For example, he points out that his extraordinary memory for numbers is augmented by “the unusual way in which my mind perceives numbers as complex, multi-dimensional, coloured and textured” that allowed him “to compose something like a visual song.” Tammet concludes that all humans have something unique to contribute to the world, and he himself has a gift for rendering science accessible and even delightful.