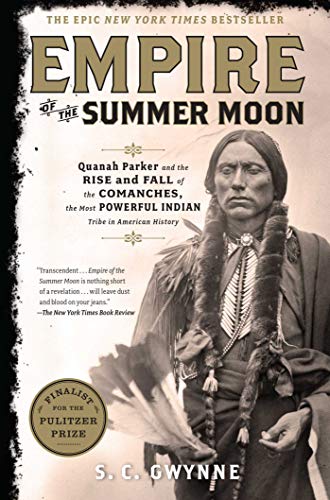 Empire of the Summer Moon: Quanah Parker and the Rise and Fall of the Comanches, the Most Powerful Indian Tribe in American History

Journalist Gwynne tracks one of the U.S.'s longest-running military conflicts in this gripping history of the war against the Comanche Indians on the high plains of Texas and Colorado. The Comanches stood for decades as the single most effective military force on the southern plains; their mastery of horseback warfare and their intimate knowledge of the trackless desert of the plains stymied the armies of Spain and Mexico, and blocked American westward expansion for 40 years. Gwynne's account orbits around Quanah Parker (ca. 1852–1911), the brilliant war chief whose resistance raged even as the Comanche, increasingly demoralized by the loss of the buffalo and the American military's policy of total annihilation, retreated into the reservation. Rigorously researched and evenhanded, the book paints both the Comanches and Americans in their glory and shame, bravery and savagery. The author's narrative prowess is marred only by his fondness for outdated anthropological terminology (“low barbarian,” “premoral” culture). That aside, the book combines rich historical detail with a keen sense of adventure and of the humanity of its protagonists.