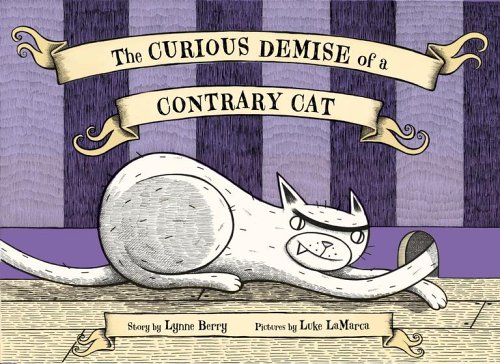 The Curious Demise of a Contrary Cat

Safe to say, pet owners should think twice before sharing Berry's ( ) rhyming suspense story, which cheerily bounces to its foretold conclusion. This tale's "contrary cat" has better things to do when Witch hosts a party. As gnomes and skeletons arrive, " 'Cat,' said Witch, 'fetch me a chair!'/ But Cat was busy, eyeing Bat./ 'Cat?' said Witch./ 'Purr?' said Cat./ 'Chair!' said Witch./ 'Grrrrr,' said Cat./ And that was the end of that." This pattern repeats, with the wicked Cat stalking guests and an in-house Rat, rather than bringing a cup to serve punch or sweeping up afterward. In his picture book debut, LaMarca depicts the haunted rumpus in pen-and-ink illustrations that emit the weird and wild energy of a Betty Boop cartoon. Witch shakes her fist and jumps up and down in vexation with Cat, and readers begin to dread her wrath. Ultimately she needs a toad for a potion, and with no real toad available, she makes a substitution in the recipe. Berry's pseudo-Victorian title and LaMarca's memorable illustrations allude to Edward Gorey (who himself was inclined to skewer "Gashlycrumb Tinies" in his lampoons of children's books), but the only mystery is how the predatory, ill-mannered cat will meet its end. Although presented as a lightly frightful comic, this still places a low value on animal life. Dan Yaccarino's offers better advice on appreciating pets' natural idiosyncrasies. Ages 3-7.