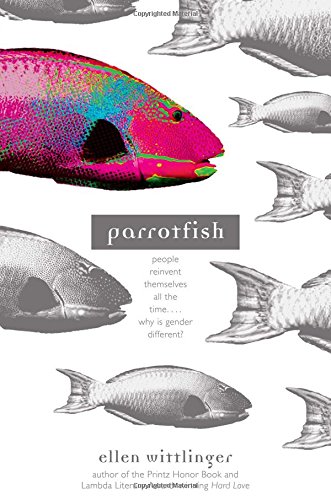 Grady, the teen at the center of Wittlinger’s ( ) latest novel, realizes that “inside the body of this strange, never-quite-right girl was hiding the soul of a typical, average, ordinary boy,” so he changes his name (he was born Angela) and starts living as a guy. As one might expect, he faces different degrees of acceptance both at school and at home. Grady deals with a bully who is bent on his humiliation, but makes friends with an offbeat boy writing a report on spotlight parrotfish (which also change from female to male), and attracts the attention of a biracial girl. The story has an unusual backdrop: Grady’s father is obsessed with Christmas, setting up elaborate decorations inside the house and out and forcing his family to perform an adaptation of for their neighbors. Readers can predict that something poignant—if rather unbelievable—will happen during this year’s performance (Grady has written a new version, which includes his pronouncement that “Things as they should be, Father, are not things unchanging”). Overall, though, Grady is portrayed realistically, which makes it easy to think of him as a boy. The author demonstrates well the complexity faced by transgendered people and makes the teen’s frustration with having to “fit into a category” fully apparent. Ages 12-up.