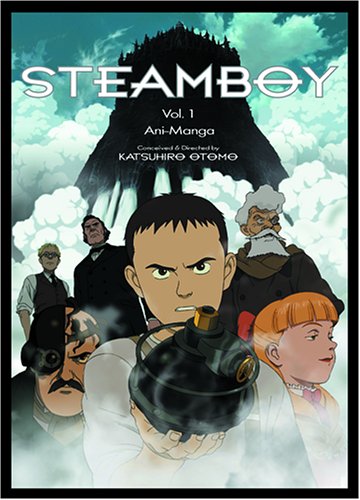 Steampunk meets manga in this latest offering from creator Otomo. Precocious Ray Steam is a worker and inventor in a world where the Industrial Revolution spawned giant, convoluted steam machines, and a Russian monarchy rules the United States. He carries on the family legacy started by his father and grandfather, both of whom are overseas working on new technology in Russian America. When his absent grandfather sends him a "steam ball" (a device containing water so pure it can allow for the construction of steam engines on a much vaster and more destructive scale than water alone), Ray becomes the target of bad men of unknown origin. The plot complicates quickly, as young Ray must choose between sinister old confederates of his grandfather on one side, his father (aided by the wealthy American O'Hara Foundation) on the other—and maybe even his grandfather on a third. The art is derived from cels from the 2004 full-length anime feature, and is, not surprisingly, gorgeous to look at. Backgrounds are lovingly rendered, action is clearly laid out, characters are well drawn and the coloring adds atmosphere to every scene. Otomo aims for an amped-up Jules Verne effect and largely succeeds.