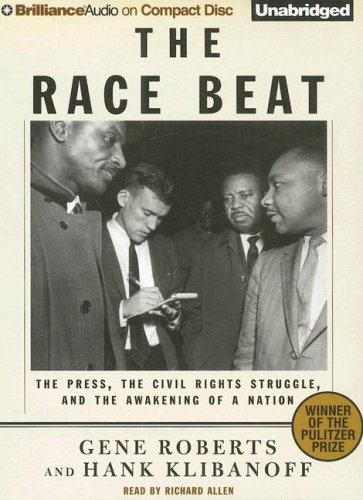 The Race Beat: The Press, the Civil Rights Struggle, and the Awakening of a Nation

This Pulitzer-winning chronicle of the role the news media played in shaping the civil rights movement makes its belated audio debut. Richard Allen undertakes the vocal depictions of the players from across the race-relations spectrum with tremendous skill. He manages to portray characters instead of caricatures as the sweeping real-life drama unfolds. Given the length of the recording and the density of the material, listeners should find it particularly helpful that Allen repeats the last few sentences of the previous disc at the start of each new CD. The solid production follows the authors' straight-ahead narrative approach. Journalism students and history buffs with at least some grounding in both the conventions of the news business or the civil rights era are the natural core audience. Others may wish to familiarize themselves with more general resources before tackling such an ambitious offering.