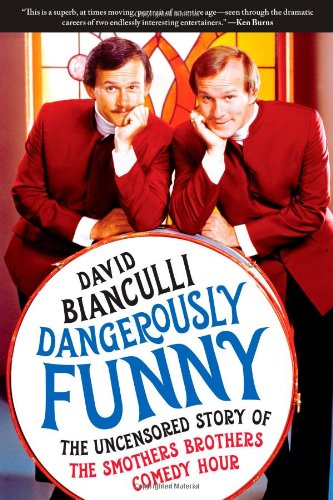 Tom and Dick Smothers had confrontations with CBS censors when they did their satirical television series from 1967 to 1969. To write this authoritative and entertaining examination of a comedic cornerstone, TV critic Bianculli ( ) interviewed scores of producers and performers. He reveals what went on behind the cameras and also probes “the generational, artistic, and moral duels being fought in the ’60s.” He opens with the childhood of the brothers (and sister) when their father became a WWII POW fatality. After high school and college bands, the brothers rode the folk music wave into San Francisco’s Purple Onion, switched to comedy at Aspen, and recorded their debut comedy album in 1960, exploding into fame on Jack Paar’s show. After the failure of their 1965–1966 CBS sitcom, they went full throttle when their variety series, , began taping in 1967, pushing boundaries “musically, comically, satirically, politically” and courting controversy. They strove for topicality while CBS scrambled to avoid it: “For CBS, almost every mention of religion, sex, drugs, politics, and war was anathema.” Reviewing each episode, entire sketches and individual gag lines, the book probes internal battles, with Tom Smothers “fighting censors, executives, affiliates, and increasingly his own managers and staff members.” Documenting each event that led to the show’s cancellation, he concludes this entertaining and well-researched bio with the duo’s huge influence on “today’s TV troublemakers and iconoclasts.”