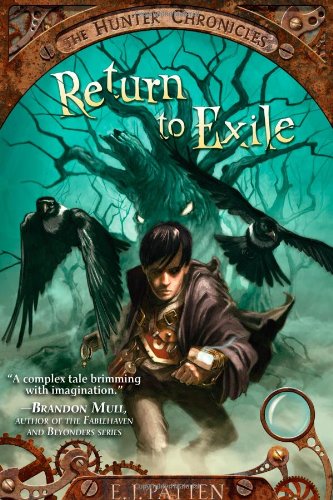 Thanks to his eccentric uncle Phineas, 12-year-old Sky Weathers is proficient with traps, riddles, and puzzles, and he knows much about supposedly mythical monsters like the Echo ("vaguely treelike with large black leathery wings"), Shadow Wargs, and Edgewalkers ("dream-stealers, gorging on a person's hopes and fears"). When Sky's family moves back to his childhood hometown of Exile, these skills come in handy after he discovers that an ancient evil, long trapped in Exile, is about to break free. Teaming up with a group of would-be monster hunters, Sky unlocks his hidden abilities and fights shape-changing creatures, carnivorous plants, and more, while dealing with the day-to-day reality of school bullies and antagonistic teachers. The frenetic story line, flurry of revelations and secret identities, and large cast occasionally make this debut novel, the first book in the Hunter Chronicles series, hard to follow, but Patten more than makes up for it with his original mythology, easy sense of humor, and action-packed sequences. Amid the innumerable vampire, zombie, and werewolf stories available, it comes as a breath of fresh air. Final art not seen by PW. Ages 8%E2%80%9312. (Sept.)
close
Details