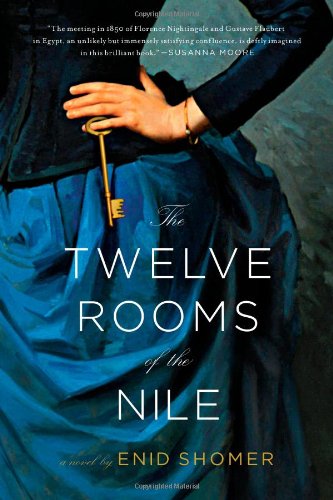 The Twelve Rooms of the Nile

In her debut novel, poet/storywriter Shomer (Tourist Season) imagines Gustave Flaubert and Florence Nightingale meeting in Egypt, among the crowds cruising the Nile. This is 1850, before Madame Bovary was written or Nightingale famously tended to the wounded in the Crimean War. Shomer portrays the Frenchman and the Englishwoman as seemingly having little in common: he frequents brothels, makes squeezes (tracings) of monuments, and copes with the failure of his early fiction by writing pornography. She travels with chaperones, reads hieroglyphics, and sleeps under a newfangled contraption to keep mosquitoes at bay. Sharing itineraries, the two discover they both possess unquenchable ambition, and they both suffer from depression over the gap between dreams and reality. Mutual respect begets attraction, and soon Nightingale is teaching Flaubert how women think, while Flaubert teaches Nightingale how men feel. Poetically evoked, Egypt proves as multidimensional and conflicted as the main characters, while Nightingale’s maid provides humor and pathos. Narrative drama is not Shomer’s forte, but she makes up for the meandering pace with rich landscapes, probing character studies, and well described insights into inspiration and genius. Agent: Rob McQuilkin, Lippincott Massie McQuilkin. (Aug.)
close
Details